The History of Our Chesapeake Bay Bed &Breakfast in Maryland

We Offer Generations of Heritage & Hospitality on Maryland’s Eastern Shore

In 1799, the property traded hands to Colonel Hugh Auld before it was passed to Thomas Kemp in 1813.

The Wades Point property suffered considerable damage at the hands of the British during the War of 1812.  Having come ashore on barges they destroyed the home and farm buildings and then headed toward St. Michaels before they were turned back by the local militia.  They then sailed on to St. Michaels where they were humiliated by the old “lanterns in the trees” trick. In the dark morning hours of August 10, 1813, a number of British barges had planned an attack on the town and on a fort on the harbor side.  The residents of tiny St. Michaels, forewarned, hoisted lanterns to the masts of ships and in the tops of trees, tricking the British by causing the cannons to overshoot the town.”  (Source: The History of St. Michaels – www.stmichaelsmd.org.)  Though a dear Englishman in St. Michaels tells us this story is complete rubbish,  maybe so,  maybe not,  but it is a good story!

It could have been this destructive skirmish that prompted Auld to sell the bullet-riddled house and property to the renowned shipbuilder Thomas Kemp who was living in Baltimore with his family at the time. His shipyard was prospering and he paid the whopping price of $7,000 to purchase land next door to the land of his youth. 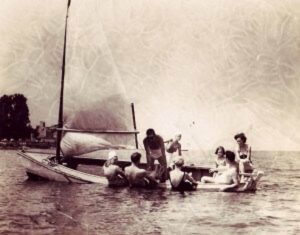 Thomas Kemp’s talent as a shipwright, likely learned in St Michaels, more than prepared him for the task of designing and constructing his new home. His attention to detail is evident throughout the house and his artistic eye is reflected in his exquisitely scripted diaries, which recorded daily weather, events and the construction preparations and process.  It is known from his diaries that he journeyed across the bay to study architecture in Annapolis. The Brice House seems to have been an inspiration. Stripped of its porches, the lines in Wades Points lovely 2 ½ story 5 bay simplified Georgian style brick home are nearly identical to the Brice house. The staircase in the main house is the original solidly built staircase with walnut newel posts and handrails. The worn treads that take you to the upper floors are the very same that Thomas trod upon as well as generations of Kemps, relatives, friends and numerous children. Thomas Kemp was fascinated by the movement of the ships on the bay, no doubt at times watching for his most well-known construction known as The Pride of Baltimore,  and he added a structure that has been dubbed the Lookout. Tucked away against the inside face of the interior end brick chimney is a hidden room with a window on the bay and another facing the road.

The Chesapeake Bay’s ever-encroaching tides and resulting land erosion necessitated that a new home be located much further inland.  Over the years, the bay has swept away many acres of land and would continue to do so if it were not for the seawalls and rip rap that now stabilize the shorelines at Wades Point Inn.  Consider Poplar Island, a nearby example of a such erosion and the massive effort to reclaim the island.   Just a short boat trip from Wades Point’s location.

August of 1821 was moving day for the Kemp family, and the old house built by Leeds, once vacated, was carefully dismantled.   Each brick was cleaned and reused for an addition, which began in the fall of 1821. This was the kitchen, and it followed the regional telescoping design that is common throughout the county. It is likely Thomas would have preferred to use newly fired brick as he had done in the main house, unfortunately the kiln with which the farm produced and sold bricks over the years was destroyed in a barn fire that was accidentally ignited when Daniel Haddaway’s son, with all good intentions, was in the barn shooting at rats. Thomas Kemps journal entries regarding the fire visibly reflect strong emotions in a handwriting that is noticeably larger and heavier than usual. The poor Haddaway child, its likely that he experienced a paddling that was also noticeably larger and heavier than usual.

Even before the completion of his home, Thomas turned his attention to the education of his own and the local children building a neighborhood school on the property. He also kept his hand in the shipbuilding industry of St. Michaels and Talbot County. It was however the sale of products from the farm that paid the bills and covered the wages. One year the farm produced and sold 5,500 gallons of cider, along with tobacco, flax, rye, wheat, fish, wool, feathers, flour, potatoes and apple brandy.

Sadly Thomas Kemp died fairly young, for reasons unknown, at the age of 45. Upon the highest bluff is the family cemetery where he was laid next to Colonel Auld.  Auld had died after he sold Wades Point to the Kemps, but it was his specific request to be buried at Wades Point.

Auld was moved to Arlington Cemetery, section 2, in 1935, though the story goes that it is dirt from Wades Point that is buried there, as no remains were uncovered. We think he much preferred to stay here in his own little piece of heaven.

Under threat from the bay, the cemetery remains, with several the headstones still legible. Representing Thomas Kemp, one of his sons, a daughter-in-law, and several grandchildren, the headstones read:

At Thomas Kemp’s death, the property passed to his 2nd wife, the first had died 6 yrs after their marriage from complications of childbirth. A tax assessment of 1826 records the 236-acre Eastern Bay property with a total value of $2,235.   The later property passed to son John W. Kemp, who had added the middle initial to distinguish himself from the multitude of John Kemps. “W” initiated the shift from a tobacco farm to the grain-dominated agriculture of the late 19th century. As the farm continued to prosper,  he added in the Greek Revival style, a beautiful 2 story front porch and a portion of the back porch that we so enjoy today.  The south room or parlor was remodeled in 1850. The entry door was framed with a bold Greek Revival surround topped by a stepped pediment. Unlike any other room in the house the parlor is fitted with 19th c Greek Revival woodwork. 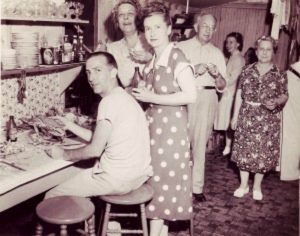 Wades Point was passed to Joseph Oliver Kemp in 1876 and he and his wife, “Miss Katie”  made the transition to a summer resort. The arrival of the ferries and the mass movement across the bay brought a steady stream of family and friends from the western shore such that adding rooms and charging for their use was a necessary defense. But oh they had fun as numerous pictures and stories show.

“Miss Katie” ran the farm and bed and breakfast for 20 years after the death of her husband, with assistance from her many children. After her death in 1943 Wades Point passed to their two sons and four daughters. Most of these siblings had married and moved away but eventually returned back to living at Wades Point for various reasons, helping to run the farm and inn. Joseph and Kate’s oldest son, Earle Kemp and his wife Mildred, left their home in Baltimore to take over the farm chores, after his brother John. W Kemp II moved to Seattle. Joseph and Kate’s four daughters, Helen, Louise, Eleanor and Kathryn, all had their special chores, cleaning, shopping, cooking, arranging the many flowers that graced the living quarters and entertaining the many guests. They continued to live on or near the property until their deaths. After the others had passed away or moved, Mildred lived on the farm alone and running the inn into her 90’s until it was sold to the present owners, the Feilers, in 1984.